skip to main | skip to sidebar

My Parents are So Rude

Not only are they rude, but they have the cajones to capture their rudeness on video tape. I'm quite certain I could use this video as some sort of evidence when I call the Never Wake a Sleeping Baby Police and get them put in You Woke a Sleeping Baby Jail.
Isn't that the rule? Never Wake a Sleeping Baby? That's what I thought, but Mommy Chick and Daddy Dude clearly did not get the memo. They've been all in a tizzy because I changed my bedtime. I'm getting older, so I like to watch prime time TV, then I need to catch the first block of the local news. That put me hitting the Baby Hay around 11:15 for a few nights.
So I heard them laying in their bed, frantically plotting the end of my late bedtime.
Here is Phase One of their plan. By the way, MC doesn't always sound like a man. She's been sick, so it gives a nice, husky/nasal tone to her voice. Sexy.
Even my Big Brown Dog is a part of the conspiracy. But I have a plan of my own. Last night I slept from 9:30 until 8:15. I'll do that for a few more nights, you know, lull them into a false sense of victory. Then I'll sneak attack by demanding to watch late night infomercials.
I'm starting to get a little hair, so I need to learn all about the Bump It.
Posted by Monkey Mae at 8:27 AM 4 comments: 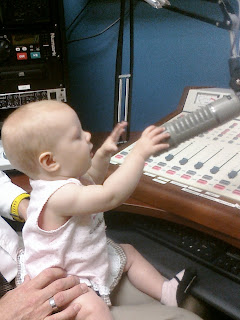 Here I am in the radio studio laying some tracks. Is that even the right terminology? I'm not sure. Mommy Chick teaches TV at a local broadcast school, but I'm considering going into radio instead. That way, I can pretty much wear whatever I want and I won't be required to make my hair all puffy.
Here I am wearing one of my little Carter's get ups. I love their sunsuits because they are super cute and most of them are around $10 or less. When I got home from the studio, I actually had an epic poopslosion.
MC questioned even attempting to save this outfit. She did, but had we opted to toss it, it wouldn't have been all that tragic.
We saw this interesting link. Have you ever wanted to dress like a TV news anchor? Me neither, but if you know someone who does, pass this along to them: TV News Closet.
It's where you can buy all the stuff you favorite news anchors have cast aside. We were perusing, and there are actually some great deals. So if you are looking to expand your professional wardrobe, take a gander!
Posted by Monkey Mae at 8:36 AM No comments:

Swimsuit season is upon us, so in honor of Fergalicious, I'm "workin' on my fitness." While on vaycay, my new love John Carter let me try out his exercauser.

Delicious and fun!
So imagine my delight last night when my Gigi bought me my very own Baby Einstein Exercauser! Gigi is for sure one of my very best employees. Not only does she hang with me on the days Mommy Chick works, but she pretty much does whatever I tell her to. One time, she let me drink 15 ounces of boobie milk in less than three hours! I like to refer to that as "The Best Day Ever."
The Baby Einstein exercauser is $79 and worth every penny. As MC's boss, I generally disapprove of time-wasting activities like showering or cleaning. But when she insists, this will keep me safe and occupied.
Posted by Monkey Mae at 9:34 AM 1 comment:

I Want a Pool!

In my fantasies, I have a glorious pool with a waterfall.  Throw in some mojito-flavored boobie milk and a Gay Pool Boy (preferably one who wears a sassy mule), and I'd say life is just about perfect.

When Mommy Chick and Daddy Dude found out I was stowing away in her tummy, they started talking about finding a new house.  We live in a super cute Old Florida bungalow deal.  It actually belonged to my great-grandparents.  MC thinks sometimes they come visit me from the other side.  She thinks that because weird things happen, like my swing turns itself on and I like to talk to air.  All sorts of freaky stuff like that has always happened to MC, and maybe one day I'll let her do a guest post to tell you all about it.

Anyway, that's my really long-winded way of telling you that we have not found a new house and I'd say we will probably be in our bungalow for another year or so.  Our pool-less bungalow, that is.

So MC and I are entertaining the idea of a little baby pool for me.  The problem is that my Big Brown Dog will probably dive in and pop it.  And by "probably," I really mean "definitely."

I was reading Allyson and Dave yesterday and she mentioned this fabulous whale pool from Pottery Barn Kids.  It even has a blow hole!  You can have your very own whale for $59. 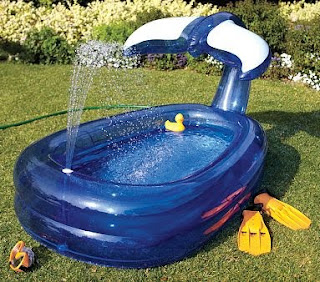 I am resisting telling you that it looks like a whale of a good time.  That would be cheesy and I frown upon cheese.  It makes me toot.
Posted by Monkey Mae at 9:05 AM 7 comments:

Babies and Chiropractic: Watch Me Get Adjusted!

I think I've mentioned before that Daddy Dude is a chiropractor. And sometimes when we suggest to other Monkey Baby parents that they take their spawn to a chiro, people act like we've suggested they sacrifice a goat over their kid (do you like that? goat? kid? get it?). Speaking of goats, I met some really funny ones last week.
Back to chiropractic and Monkey Babies. It probably does seem wacky if you don't know how it's done. People are all like, "Oh no, my baby is too little to be cracked."
Here's the deal. I am not an egg. I mean, I guess I was at one time, but then I got fertilized. That turned me into an embryo, right? I'm not so good at biology. Then I became a fetus and then a Monkey Baby.
So since I'm no longer an egg, it would be inappropriate to crack me.
Did you know that babies who have regular chiro care often have fewer ear infections, less colic and are generally more attractive? OK, I made up that last one. Well I didn't completely make it up, but I just don't have any studies at the moment to back up my claim.
Just for you, I decided to go undercover as a patient at DD's practice. I always get adjusted before I fly so that my ears don't get all freaky deaky on the plane. I do get kind of ticked because I HATE being held still. I'm a Monkey on the Move!
I wore my unisex pants in hopes of being incognito, but I think DD still recognized me.
BTW...I'm a much better patient than Mommy Chick, who is completely embarrassing. She shrieks things like, "This is worse than labor," and "You are killing me."
So don't be fooled. She's running the camera, giggling at me all smug, like she just loves to get adjusted. It's an act, I tell you.
I'm going for a cranial-sacral tune up on Friday. I'll tell you about that next week.
Don't worry. I'll get back to fashion and fun products tomorrow. I'm not going to go all crazy-educational on you. That's what Elmo is for.
Posted by Monkey Mae at 11:21 AM 6 comments:

So I had a lot of firsts while on my glamorous vacation to Louisville, Kentucky. I rocked my first photo shoot with my two fabulous cousins, I used a sippy cup for the first time, and I met these funny looking dog-like creatures with horns!
Mommy Chick and I spent a few days at my Nana's and Papa's house. It's the same house where MC lived when she was a little Monkey Girl. It looks like any other middle-class suburban 'hood. But it's not!
We went for a walk one night, and right behind one of the houses, we stumbled upon a pond.
Look who lives there! MC said these are called goats. I might get her one for Mother's Day. I think Daddy Dude will really like that idea.
Look how fast the goat moves his Pretty Goat Lips. I'm going to practice that technique for drinking boobie milk.
So according to my Nana, the city brings in these goats to eat the grass around a retention pond. I think that is the height of laziness and probably requires more effort than just mowing the lawn.
But it's a lot more fun feeding goats than visiting city workers, so I won't complain.
Posted by Monkey Mae at 8:21 AM 2 comments:

Did you miss me? I hope so. It has been a whirlwind last few weeks and I've been on a bit of a hiatus. Mommy Chick and I went to visit our peeps in Kentucky. The trip was fabulous. You know what's not fabulous? No wifi.

MC and I went totally white trash and were sitting against walls of my Auntie Dill's house trying to steal wifi from her neighbors. Allegedly. If I say allegedly, then that can't serve as a confession and I can't go to Internet prison.

Here are some of the highlights from my trip. I had a big photo shoot with my two cousins, Banana and Noodle. Do you think we look alike? Banana calls my blog my "blob." 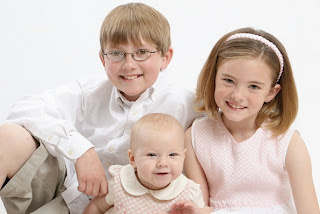 I really like this next photo because I am the star. 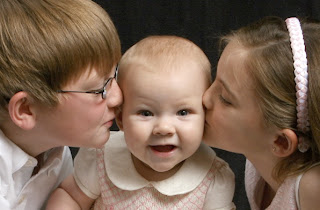 You'll notice I am starting to get some hair. The styling possibilities are now endless.
I also met my new boyfriend, John Carter. He is MC's BFF's baby. He is a month older than me, and I love that he is confident enough to rock a Flock of Seagulls 'do.
MC captured our first meeting on video. He has never seen another baby exactly his age. Check it out, he woke up from a nap and found me in his living room.
Do you think I seem too into him? As I was posting this, I noticed MC calls me by my other name in this video. It must be a nickname because she mostly calls me "Monkey" or "Mae Mae."

Tomorrow I'll share some other highlights, including goats!
BTW...I am seven months old today! Yay me!
Posted by Monkey Mae at 12:11 PM 4 comments:


Create your own video slideshow at animoto.com.
Posted by Monkey Mae at 6:29 PM 2 comments:


Have a question or an idea?
Email me at monkeymaesays@gmail.com

I'll Send You a MonkeyGram!

Read How Fab I Am!

Monkey Mae
I am a Bald Monkey Baby who thinks that yes, that diaper does make you look fat. I employ a Starbucks chugging, lip-gloss-obsessed, recovering television meteorologist. She is my ghost writer and go-to-gal. I call her Mommy Chick.

Here's What You Missed

These People Think I'm Kind of a Big Deal

Mommy Chick Reads These to Me 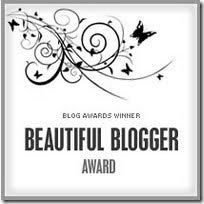